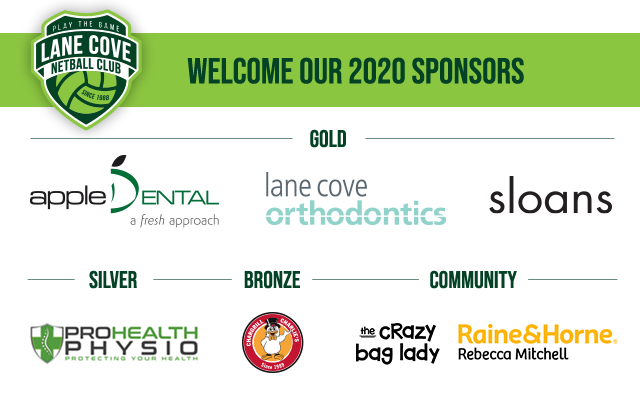 We’d like to take a moment to announce these incredible local businesses that have enthusiastically agreed to support our club for the next three years!

Netball is a fantastic sport. It is a sport predominately played by females (for now!) and it is growing in popularity. Netball has one of the highest participation rates for young girls of any sport played in Australia. Greater awareness by our community and local businesses will in-turn also create greater awareness of this fantastic sport!

We are very grateful that the following businesses have decided to stand behind Lane Cove Netball Club and women’s sport, netball, health and fitness in general.

Some of these businesses are repeat offenders!!! Apple Dental, ProHealth Physio and Chargrill Charlie’s have been long-term supporters of our club. We also welcome Lane Cove Orthodontics, Sloans and The Crazy Bag Lady, who have joined in the fun this year.

Let’s proudly acknowledge our Lane Cove community and the locally-born businesses in it by thanking and returning support to these sponsors whenever possible.